← more from
Astral Spirits
Get fresh music recommendations delivered to your inbox every Friday. 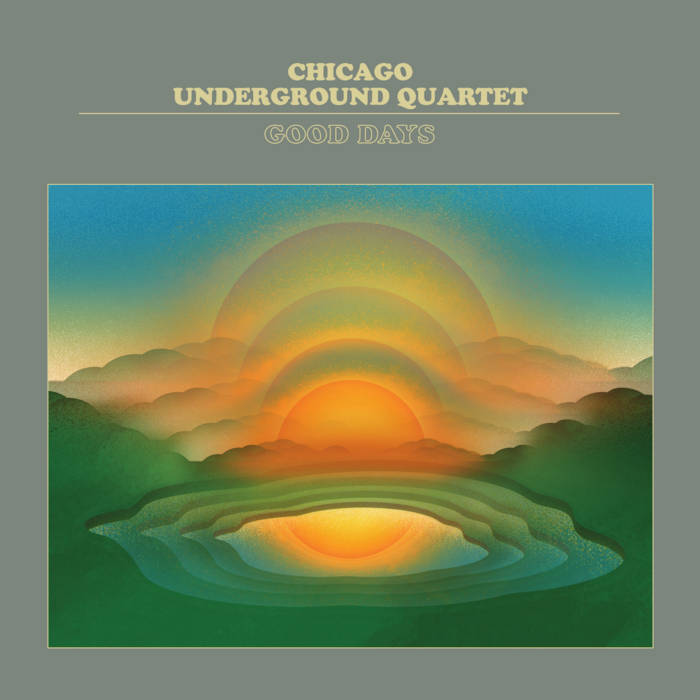 Hobie Anthony So happy to see a new album from this band. I've long been a fan of Mazurek and Parker's work in Tortoise, on top of the CUQ... Anyhow, if you're curious about contemporary jazz, this is a terrific place to start.
Favorite track: Orgasm.

John Pope Masterful, restrained and explorative, yet also fully capable of explosive chemistry when the time comes. A fantastic set, constantly engaging from top to bottom.

An excerpt from Peter Margasak's liner notes for Good Days:

On May 13, 2000 the Chicago Underground Quartet played one of the most searing and transcendent sets of music I’ve ever witnessed, as part of the Empty Bottle Festival of Jazz & Improvised Music. Cornetist Rob Mazurek, guitarist Jeff Parker, drummer Chad Taylor, and bassist Noel Kupersmith performed with a fiery singularity of purpose, ripping through its set like a bulldozer, albeit a machine marked by nuance and soulfulness. The following year the same line-up—which had previously made two albums for Delmark as the Chicago Underground Trio despite, with Parker nominally billed as a guest—dropped its eponymous debut on Thrill Jockey, serving up one of the strongest entries in the city’s modern history. Little did anyone know it would be nineteen years for the follow-up to surface. While Mazurek and Taylor continued to work together as the Chicago Underground Duo, and those two and Parker would occasionally collaborate in other contexts, it took a savvy maneuver by the Los Angeles producer, guitarist, and songwriter Chris Schlarb to bring all three together again for the first time in nearly two decades. Parker also enlisted saxophonist and keyboardist Josh Johnson—a Chicago native now based in LA, who plays in the guitarist’s New Breed band—to hold down the bass function, using a Rheem Kee Bass as well as adding depth with various keyboards.

Working on a recording for his long-running Psychic Temple project that featured four diverse bands and artists in collaboration (Cherry Glazerr, the Dream Syndicate and rapper Xololanxinco), he gathered the erstwhile core of the Chicago Underground Quartet at his BIG EGO studio to participate. In exchange he offered to produce a new session by the band, nonchalantly fomenting a low-key reunion. Unlike the previous recordings by the band, which had been preceded by rigorous rehearsals and steady gigging by a working combo, this time the musicians site-read tunes each player brought in, ran through some arrangements, and recorded the album in a single day. “It sounds cohesive in the same way as when we were actually a working band,” says Parker. “You can hear it, we’re a lot better now.”

While only Taylor’s loping, funky “Batida” was composed specifically for the session, older tunes Parker and Mazurek contributed were composed with one another in mind. The guitarist originally wrote the smolderingly beautiful “Good Days” for Mazurek, although the horn player wasn’t available for the session that produced his sublime 2012 trio album Bright Light in Winter, while the latter realized he envisioned a role for Parker on his “Strange Wing” when he wrote it as part of a commission for the Novara Jazz Festival. Still, the group injects something new and distinctive into every piece, including the opener “Orgasm,” an Alan Shorter tune from 1969 that Taylor first arranged for a 2018 project in Philadelphia, which toggles between groovy hypnosis and spacey yet tumultuous exploration. “Unique Spiral” by Mazurek takes on a very different vibe than the version featured on his 2019 acoustic quartet album Desert Encrypts Vol. 1, where it was titled “Encrypts 37.” He plays piccolo trumpet across the entire session, transmitting a new timbre for the group. “On Jeff’s ballad it fits on the horn so well, it feels like a bird singing,” he says. “It’s papery.” Indeed, even at his most ferocious there’s something delicate, even vulnerable, about his sound on this record.

The album also features a couple of solo pieces, including Mazurek’s haunting invocation “All the Bells,” where tart smears and sputters infect a brittle melody voiced over meditative chimes and metallic clatter, while Taylor’s solo log drum piece “Lomé” taps into the same sort of African roots excursions he so deftly revealed on his 2018 solo album Myths and Morals. In fact, what becomes clear as the album progresses is how many tools, ideas, and abilities each musician has acquired since they last all worked together. “We all grew musically and everyone was super active in their own things,” says Mazurek. “It didn’t feel like any time had passed. The only thing different is that maybe everyone’s concept of making music is stronger after twenty years, but still similar, at least for this thing. I’ve ventured into some real crazy shit, but I love playing melodies and doing song structures as much as making the noisiest non-structured thing ever.”

“Those dudes are still some of my favorite musicians on the planet,” says Parker. “Every time I see them it’s like we’re just picking up where we left off. We’re all very good friends and it’s very easy. It didn’t feel any different to me.”

Bandcamp Daily  your guide to the world of Bandcamp